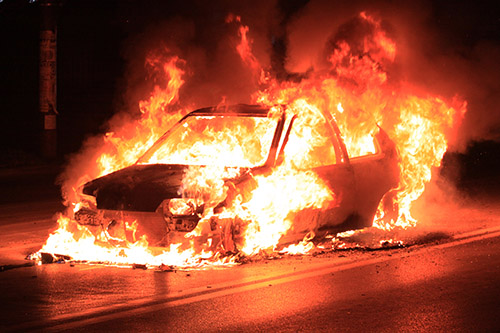 I thought this was a pretty insightful observation, because that is exactly what Democrats are doing these days. In the past couple weeks, the nation’s Democratic mayors and governors were ordering police to stand down and encouraging the rioters. Anything but actually stopping the rioters from doing hundreds of millions of dollars worth of damage, and actually killing 17 people.

So let’s just completely dispense with the idea that these people were protesting the death of George Floyd, because how can the unjust death of one person justify the actual murder of 17 more?

I won’t bother to list out all the mayors and governors that encouraged this madness and criticized president Trump for taking action against it.

But let’s talk about the latest insanity to come out of Democrat Party brains – defunding the police. Last week the Minneapolis City Council voted 9 to 3 to completely defund their police department. It’s a little unclear whether they intend to have no police at all in their city, but that’s what it looks like.

Mayors of Los Angeles and New York City stated their intention to cut police budgets by hundreds of millions of dollars.

So the riots we saw this past week are just a preview of what’s to come, apparently, under these insane people. It makes you hanker for the days when the adults were in charge. It also makes me consider buying a firearm, something I’ve never done.

So are these people that stupid, or is there some other agenda here? I think that there is a deeper agenda, though I wouldn’t rule out stupidity. The agenda is:

Let’s talk about #2 first. In case you don’t know what the Cloward-Piven strategy is, it is defined in Wikipedia as:

“The Cloward–Piven strategy is a political strategy outlined in 1966 by American sociologists and political activists Richard Cloward and Frances Fox Piven that called for overloading the U.S. public welfare system in order to precipitate a crisis that would lead to a replacement of the welfare system with ‘a guaranteed annual income and thus an end to poverty.’

“Cloward and Piven were both professors at the Columbia University School of Social Work. The strategy was outlined in a May 1966 article in the liberal magazine The Nation titled ‘The Weight of the Poor: A Strategy to End Poverty’

“The ultimate objective of this strategy—to wipe out poverty by establishing a guaranteed annual income—will be questioned by some. Because the ideal of individual social and economic mobility has deep roots, even activists seem reluctant to call for national programs to eliminate poverty by the outright redistribution of income.”

Since 1966 the goals that Cloward and Piven outlined have changed somewhat, to:

If you look over this strategy, then Democrats’ efforts to make various societal situations worse makes perfect sense. Increase drug abuse, crime, homelessness, and illegal immigration. Blame America, capitalism, free markets, Republicans. And since they own the mainstream news media, the media is all in on this strategy.

So let’s get back to Trump.

Basically under Obama, this Cloward-Piven was given the greatest bump forward since LBJ’s “Great Society.” Also Obama did his level best to create more racial tension in America that had all but disappeared before he came on the scene.

Far-left liberals became extremely spoiled by the Obama years. They expected Hillary Clinton to be elected and their destruction of America as we have known it to be complete in just a few years.

Donald Trump is the biggest threat to the far-left and their agenda of anarchy since Ronald Reagan, perhaps an even bigger threat than Reagan. Trump is a fighter, is truly an “America first” guy, perhaps the first real “America first” president in my lifetime. Everyone prior to Trump was at least somewhat buying into this leftist idea that the reason that America was so successful was that we cheated. So it was OK if the other NATO nations didn’t pay their way and we supported them, it was OK that Japan has laws that screw over American business trying to do business in Japan. It’s OK that the UN is on US soil and we pay the majority of its bills but the organization has become a focused anti-American group.

Trump is the first in at least a generation that has disagreed with all of that. And so they hate him. And they are willing to completely destroy America just to stop him.